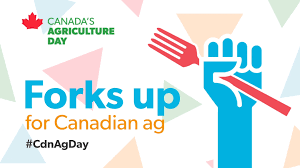 There were 4 recoveries, leaving C-K at 22 active cases.

Ontario is reporting 1,058 new cases. Toronto, Peel and York are still the hotspots.

Started in 2016 as a day of celebration for farmers.

The theme this year brings special attention to our agricultural industry and the pride they share in growing food.

The Kent Federation of Agriculture (KFA) has partnered with the Salvation Army of Chatham-Kent and Outreach for Hunger for a curbside food drive today.

The curbside donation event will be from 9-11am at the Salvation Army in Chatham at 46 Orangewood Blvd. Any monetary donations made will go towards the purchase of food products for the two organizations.

It’ll be the first official meeting between Canada and the U.S. since Biden took office on January 20th.

In his short term in The White House, Biden cancelled the Keystone XL pipeline, raising the ire of Trudeau. They’ll also discuss shared priorities and efforts to address the global pandemic.

NASA’s Perseverance rover has recorded the first audio clips captured on the surface of Mars.

It’s simply sounds of wind gusting on the red planet.

The audio clips were captured by two microphones that are mounted on Perseverance. In one, a faint buzzing noise can be heard in the background, which was from the rover itself. But roughly 10 seconds in, the microphone picked up a gust of wind, marking the first sounds recorded from the Martian surface.

Have a listen for yourself:

The first-of-its-kind audio was released Monday, along with extraordinary new video footage of the rover as it descended and landed last Thursday. The images are among the most sophisticated yet taken of Mars, and offer never-before-seen views of the rover approaching its landing site.

Now that you’ve seen Mars, hear it. Grab some headphones and listen to the first sounds captured by one of my microphones. 🎧https://t.co/JswvAWC2IP#CountdownToMars

A 24-year-old woman in Belleville, Ontario set the world record for finishing a 40,320-piece puzzle of Disney characters in 150 hours.

It is 22 feet long, by 6 feet high and weighs about 44 pounds and the second-largest puzzle in the world. She had to move her fridge, and entire living room in her Belleville apartment, with only a few inches left .

Olive will be submitting her streaming footage to Guinness to apply for the world record, but in the meantime, she says she is going to go to bed.